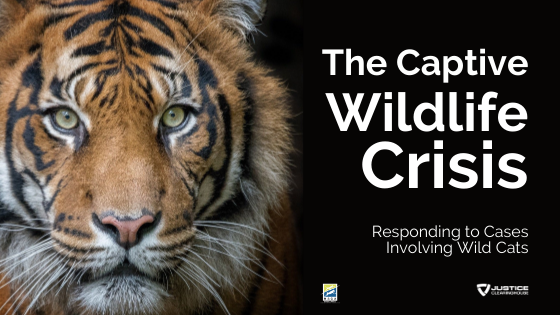 The captive wildlife crisis is a largely unknown and dangerous problem throughout the United States. The private ownership of wildlife including, but not limited to, wild cats poses a significant risk to law enforcement officers in various law enforcement agencies. In addition, limited public knowledge for identifying some wild cat species and hybrids serves as a barrier to properly enforcing the limited laws on the federal and state levels regarding private ownership of wildlife. Tammy Thies of The Wildcat Sanctuary in Sandstone, Minnesota, and Tanya Smith of Turpentine Creek Wildlife Refuge in Eureka Springs, Arkansas, work alongside the various law enforcement agencies when captive wild cats must be seized or are willfully surrendered. They will present valuable information for officers who respond to cases when the presence of wild cats (and other exotic animals) is known and when officers encounter captive wildlife including wild cats unexpectedly. In addition, Ms. Thies and Ms. Smith will discuss identifying wild cat species/hybrids, relevant laws, proper response procedures when you encounter a wild cat, and resources available to you as first responders including transport, rehoming, and placement with proper facilities after the seizure of wild cats.

Click here to view and register for other upcoming NACA  webinars on the JCH Platform. 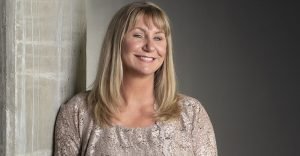 The non-profit organization was formed in 1992 when Tanya and her parents purchased 459 acres 7-miles south of Eureka Springs, Arkansas with the goal of saving and providing lifetime homes for unwanted and neglected exotic cats.

TCWR started an innovative college graduate intern program in 1996 and has trained more than 500 biologists and zoologists now employed at zoos, sanctuaries, and veterinary clinics around the world.

Tanya is an active member on the Rescue and Finance Committee of the Big Cat Sanctuary Alliance (BCSA), a member of Eureka Springs, Bentonville/ Bella Vista, Rogers/ Lowell, Springdale, Fayetteville, Harrison, and Branson Chamber of Commerce.

Tanya’s family has been caring for Big Cats since 1978. She is married to Scott Smith, who works for the refuge as Vice President and together have raised 4 children and has 7 grandchildren. 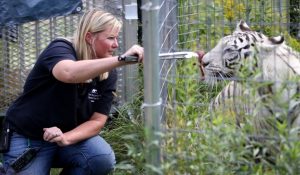 Tammy Thies is the founder of the Wildcat Sanctuary, a non-profit, accredited sanctuary that provides a safe home to felid species including, cougar, tiger, lynx and other wild cats in need of shelter.

Thies has a marketing and journalism degree from the University of St. Thomas.  After graduation, she developed and managed advertising campaigns for clients such as Coca-Cola, BMW, Holiday Inn and Timberland.

She is a native Minnesotan and during her advertising career became aware of the need for a sanctuary through her exposure to big cats during photo shoots. She learned that, throughout the United States, tens of thousands of these animals are privately owned as pets and used as performers or for-profit breeding.

Thies made a mid-life career change to become a voice for these animals.  She began The Wildcat Sanctuary in 1999. Now, years later, the Sanctuary houses over 120 residents on 85 acres in Sandstone, MN.  Animals are not bought, sold, bred or traded. Each resident is given every opportunity to behave naturally in a wonderful free-roaming environment and receive the best vet care at the on-site animal hospital.

The Wildcat Sanctuary provides educational outreach seminars to educate the public about the captive wildlife crisis across the United States, as well as supporting legislative efforts banning these practices.

Thies was very instrumental in testifying on behalf of the Minnesota Exotic Animal Law that bans the ownership of dangerous exotic animals as pets. She has assisted local law enforcement, United States Department of Agriculture and the U.S. Fish and Wildlife on cases involving wild cats.

Thies has appeared as an expert on the captive wildlife crisis across national media outlets such as the History Channel, Animal Planet and the CNN iReport. 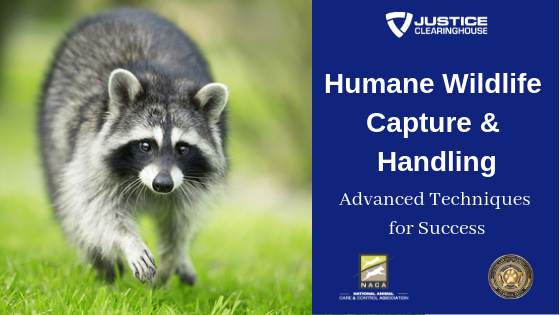