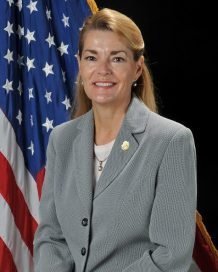 Wendy Rich-Goldschmidt is a career law enforcement officer having served in a variety of positions, ranks and capacities since 1985. She has worked in municipal, county, and state government, as well as private industry. Wendy spent the majority of her career in campus policing where in 2003, she was appointed Chief of Police at the University of Northern Colorado and, in 2009, was appointed Chief at Colorado State University. Wendy also served as the Chief of Staff for the Miami Beach Police Department from 2014-2019 where she was responsible for the administrative functions of the organization. Wendy has also spent considerable time teaching and training in classrooms and police academy settings. She has authored several articles and served as an adjunct professor at Colorado State University, and as a consultant for public and private entities, including the International Association of Chiefs of Police.

Wendy holds a Bachelor of Arts Degree in Sociology with an emphasis in Criminal Justice and a Master of Arts Degree in Educational Technology, both from the University of Northern Colorado. She is a graduate of the University of Denver’s Public Safety Leadership Institute, the FBI National Academy and numerous professional/academic leadership courses. Wendy has received a variety of awards and honors during her time in Colorado, including: Outstanding Officer of the Year, Presidential Service Award, Trailblazer Award, Medal of Honor, and was a Governor’s STAR award nominee.