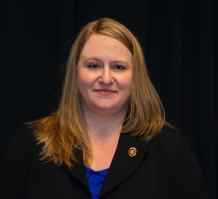 Suzann Cromer is a Forensic Scientist and the NIBIN Program Administrator with the South Carolina Law Enforcement Division (SLED).  Mrs. Cromer earned her Bachelor’s Degree from Clemson University in 1997 and began working in law enforcement in 1998.  She began her career as a Firearms and Tool Mark examiner in 2000.  Mrs. Cromer is a regular member of the Association of Firearm and Tool Mark Examiners (AFTE) and a training coordinator for the Firearms Department.   In 2010, Mrs. Cromer became the NIBIN User’s group representative for North and South Carolina and the NIBIN Program Administrator for SLED.  Since that time, she has worked diligently to increase NIBIN operations in the state of South Carolina by implementing an Entry by Appointment Program to increase NIBIN activity.