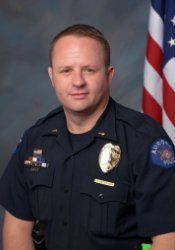 Stephen also serves as the commanding Officer for the newly formed Trauma Response Team which, as an arm of peer support, handles any line of duty injury or death of any employee or outside agency member occurring in Aurora. He is the coordinator for a newly created statewide Line Of Duty Death Response Team called the Fallen Hero Foundation.

While supervising an anti-crime team Stephen was a first responder to the Century 16 Theatre shooting in July of 2012 where he took an active role in overseeing the triage and subsequent transport of the victims as well as detention of the suspect.

Prior to joining the Aurora Police Department, Stephen was a 911 Dispatcher and a Sheriff’s Cadet with the Jefferson County Sheriff’s Office in Colorado. Stephen worked in dispatch during the Columbine High School mass shooting in 1999.

Stephen has his Bachelors of Science in Criminal Justice-Criminology from Metropolitan State University of Denver, and an MS in Organizational Leadership from Colorado State University.