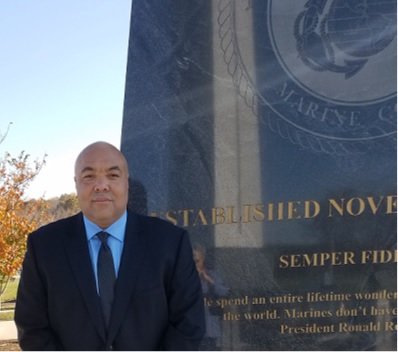 Mr. Patterson served over 15 years as an officer with the St. Louis Metropolitan Police Department having career experiences in patrol, narcotics, gang/gun/violent crime suppression and SWAT, as well as police-related training & preparation in terrorism, Weapons of Mass Destruction (WMD) and bomb awareness. In addition, he completed classes on terrorism-related subjects with American Military University (AMU) and Naval Post Graduate School (NPS). He is both a Veteran of the U.S. Marine Corps and later the U.S. Army National Guard. Along with deploying as a Marine to Operation Desert Shield/Storm, he also served a tour as a Guardsman, Infantryman deployed to Operation Freedom (OIF)

For over 5 years he served in a DoD Law Enforcement Program countering IEDs/Insurgents /Terrorists in Iraq and Afghanistan. In this DoD program, within both conflict zones, he worked on counterterrorism efforts with a host of partners including U.S. Infantry/Cavalry Troops, EOD Units, Special Forces & Special Operations, U.S. Intelligence Agencies, U.S. Federal Law Enforcement and many civilian enablers.

In Iraq, he served 16 months in Ninewa Province-Mosul and Tel Afar- dealing with groups such as the predecessor to ISIS, the Islamic State of Iraq (ISI). In this assignment, his many tasks included assisting the U.S. Military and Host Nation Security Force Partners in investigative case development to identify, locate, arrest and charge individuals with terrorism-related crimes, resulting in convictions under Host Nation's Rule of Law (RoL). His countless duties included criminal interviews of suspects, as well as mentoring Host Nation investigators on this essential law enforcement tactic. Interviews were conducted with a host of international terrorists from intended suicide bombers to bomb-makers, as well as group’s leadership and facilitators.

For the majority of four years in Afghanistan, he was provided a unique opportunity to serve as mentor/advisor to a "vetted" Afghan police undercover team combatting IED/Insurgent/Terrorist networks in a "street-level" capacity.  He and other U.S. Civilian Mentor partners worked directly on the ground with experienced Afghanistan Investigators in a covert fashion, traveling in local attire, undercover vehicles and meeting at off-site locations. The main goal of the team was to strategize against, investigate and arrest for prosecution IED, insurgent and terrorist networks as well as associated criminal groups. This involved gathering intelligence by meeting with local persons, recovering evidence and arresting suspects by using a diverse range of undercover police tactics and methods to accomplish the mission.  The Afghan assignment was under the command and supported U.S. / NATO Special Forces.

Mr. Patterson has experience in creating and conducting training in classroom and field environments overseas, as well as in the U.S. He has trained U.S. police officers on radicalization and terrorism. He has also created a class and conducted training for NATO Military Special Forces in Europe. Recently, he has begun advising corporate representatives in understanding and the planning for mitigating risks to business development in economically viable/growing areas in high-risk environments.

Mr. Patterson's latest project is an E-Course series that is geared towards several different levels of learning for all citizens including first responders.  All of these educational sessions created are based on personal experiences and lessons learned while fighting local U.S. crime, as well as combatting terrorism in Iraq and Afghanistan. He shares his combined career experiences in promoting safety and preparing for the local response to terrorism.