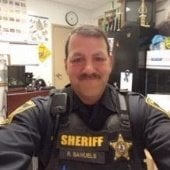 Richard Samuels has been a deputy in the Spotsylvania County (Virginia) Animal Control Division of the Spotsylvania County Sheriff’s Office for the last 19 years. He has investigated over 200 animal fighting cases — 100 of which were cockfighting investigations. For two years, Richard worked undercover as a cockfighter, witnessing over 2,000 fights. His experience in the field has enabled him to testify as an expert witness on cockfighting numerous times in the Commonwealth and federal courts.