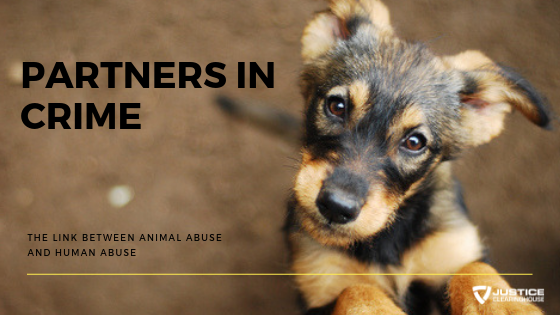 “When animals are abused, people are at risk; When people are abused, animals are at risk.” This is the message that this webinar wants to get across. People often think that animal cruelty cases are isolated from crimes committed to humans. Various researchers, however, prove that animal abuse is correlated to child abuse, domestic violence, and elderly abuse, and that cruelty to animals is the childhood training ground for some of the most heinous crimes the country has witnessed.

Joining Justice Clearinghouse to shed light on this issue  is John Thompson. He is the Deputy Executive Director and COO for the National Sheriff Association. With military and law enforcement background, John described himself as animal-neutral for the most of his life. That is until his daughter in law school wrote an article illustrating the link between serial killers and animal abusers. The fact that he was gradually bonding with their family dog helped too. These events led him to spearhead the movement that created the National Coalition on Violence Against Animals and the National Law Enforcement Center on Animal Abuse.

Some of the specifics John discussed in the webinar are:

After the Webinar: Partners in Crime. Q&A with John Thompson