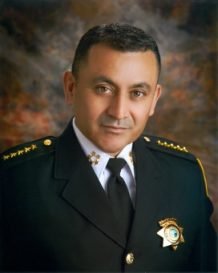 Sheriff Manuel Gonzales III has devoted his adult life to the service of our country and community.

Sheriff Gonzales began his career on August 14th, 1989. Over the span of twenty-four years the Sheriff has served in all divisions, commands, and shifts within the Bernalillo County Sheriff’s Department. Relentlessly he worked his way through the ranks of the department and was promoted to Sergeant, Lieutenant, and Captain. He was unanimously appointed Sheriff on November 30th, 2009 by the Bernalillo County Commission, when the sitting Sheriff resigned.

Sheriff Manuel Gonzales III was sworn into office on January 1st 2015. Bernalillo County is the most populous county in the State of New Mexico with approximately 750,000 residents. Bernalillo County encompasses the greater Albuquerque area. As Sheriff, he has committed himself to serving the citizens and staff of his agency.

Sheriff Gonzales and his command staff share a vision of the Sheriff’s Department as a model law enforcement agency. His experience and proven track record are essential to maintaining public trust, strengthening community relations, and providing fair and impartial service to the community. He recognizes the importance of implementing law enforcement’s best practices, utilizing modern technology, and providing his personnel with professional development opportunities. Sheriff Gonzales’s service and involvement in the community has earned him respect throughout the law enforcement community and Bernalillo County. His principles of accountability, collaboration, and fair and impartial service have made the Sheriff’s Office the most progressive, proactive, and revered agencies in the region.

Both life-long residents of Albuquerque, the Sheriff and his wife, Elaine, are raising their three teenage children in the same community where they were raised.