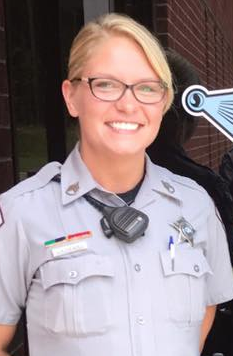 Leigh Anne Garrard started her career in Greensboro, North Carolina, with Guilford County Animal Control as an Animal Control Officer in 2006.  As an officer she attended training to improve her skills that included National Animal Control Association Level I & II obtaining a national certification as an animal control officer. Leigh Anne has additional training which includes the National Cruelty Investigations School through the University of Missouri’s Law Enforcement Training Institute Level I, II, & III, chemical immobilization certification, large animal technical rescue certification, certified euthanasia technician, and other field-specific trainings for animal services. Leigh Anne recognized a need to have two investigators whose focus was on animal cruelty and took responsibility for direct oversight of the cruelty cases in Guilford County, which included supervision of the officers responsible for those cases. The investigations group also included two law enforcement liaisons and an assistant district attorney who worked closely with animal services for stronger prosecutions for animal cruelty. Because of her experience in animal cruelty cases, she obtained part-time work with the University of Missouri’s Law Enforcement Training Institute as an adjunct instructor. As an instructor for National Animal Cruelty Investigations School, Leigh Anne taught animal services and law enforcement officers across the country about animal cruelty cases and successful techniques for positive outcomes.

In 2012 Leigh Anne became the Director for Chatham County Animal Services.  She had direct oversight of the animal shelter as well as the animal enforcement responsibilities. Leigh Anne’s work in her position as Director has allowed her the opportunity to participate as a board member and vice chair of the North Carolina Animal Federation. In this role, she obtained her General Instructor Certification through North Carolina Department of Justice.

Leigh Anne continued her career in Basic Law Enforcement Training and finished top of her class.  She was employed with Chatham County Sheriff’s Office as a Staff Sergeant.  She has used her general instructor certification to provide curriculum for continuing education training hours to law enforcement in North Carolina and across the country for animal-related calls. Leigh Anne continues to pursue her education in criminal justice through college courses in North Carolina.  She continues her work in law enforcement as an active duty reserve officer with Pittsboro Police Department in North Carolina.

Leigh Anne now works for the American Society for the Prevention of Animal Cruelty (ASPCA) as a Regional Investigator consulting and collaborating with Law Enforcement across the country on animal cruelty cases.