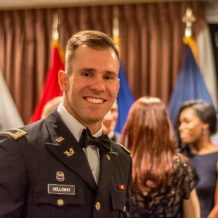 Justin Holloway is an Assistant United States Attorney (AUSA) in the District of South Carolina, where he serves as the district’s Project Safe Neighborhoods (PSN) Coordinator. PSN is a nationwide initiative that brings together federal, state, local and tribal law enforcement officials, prosecutors, and community leaders to identify the most pressing violent crime problems in our communities and develop comprehensive solutions to address them.

Justin joined the U.S. Attorney’s Office in October 2018 after prosecuting for several years at the 13th Circuit Solicitor’s Office in Greenville, South Carolina, under Solicitor (and former U.S. Attorney for the District of South Carolina) W. Walter “Walt” Wilkins.  Before that, Justin served as a law clerk to the Honorable Henry M. Herlong, Jr., Senior United States District Judge.

As a prosecutor, Justin has tried over 50 cases to jury verdict and has specialized in violent crime prosecutions since 2014.  Since becoming an AUSA, Justin has worked hand-in-hand with the Bureau of Alcohol, Tobacco, Firearms and Explosives and travels South Carolina working closely with local agencies on the implementation of NIBIN into their investigative processes.  Justin has organized statewide trainings in South Carolina focused on NIBIN and works closely with co-presenter Suzann Cromer of the South Carolina Law Enforcement Division to educate on and increase awareness of its significant capabilities.

Justin is a graduate of Furman University and the University of Georgia School of Law, where he served on a law journal.  He is the son of two U.S. Army retirees—his father a retired Colonel who served in the Military Police Corps and his mother a retired Lieutenant Colonel who served in the Criminal Investigation Command.  Following in their footsteps, Justin serves as a Captain in the U.S. Army Reserve in the Judge Advocate General’s Corps.