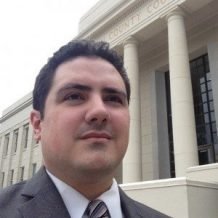 As AC-DDA, Jake trains and consults with law enforcement, veterinarians, animal rescue workers, and attorneys on animal cruelty issues. He also communicates regularly with the media as a subject matter expert and has been involved in legislative drafting and testimony.

Jake worked as a Deputy DA at the Multnomah County District Attorney’s Office from 2009-2013. He received his B.A. in 2004 from Brandeis University in Waltham, Massachusetts, and his J.D. in 2009 from Lewis & Clark Law School in Portland, Oregon. At Lewis & Clark, Jake was an Associate Editor of the Lewis & Clark Law Review and clerked at the Clackamas County District Attorney’s Office. While at Multnomah County, Jake developed a passion for working on animal cruelty cases. In 2012, he was named one of the nation’s Top 10 Animal Defenders by the Animal Legal Defense Fund.

Jake lives in Portland, Oregon with his wife, his two children, and Sophie and Scarf, the family cats.