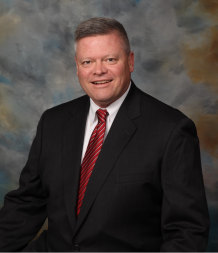 The Reverend Eric Skidmore is a native of Montreat, North Carolina. His family has lived in Montreat since 1965.  He attended the University of North Carolina at Chapel Hill, graduating in 1983. He served two years in Washington, DC with the Boy Scouts of America, followed by enrollment at Union Theological Seminary in Richmond, Virginia. Skidmore earned a Master of Divinity Degree in Richmond and in 1990 was called to serve on the staff of Eastminster Presbyterian Church, Columbia, S.C. He served on the staff of that church for seven years, in the areas of Missions, Evangelism, and Stewardship. Eric earned a Doctor of Ministry degree from McCormick Theological Seminary (Chicago, IL) in 1997. He has served as a Parish Associate on the staff of Forest Lake Presbyterian Church from 1998-Present.

In 1997, Rev. Skidmore was hired by the South Carolina Law Enforcement Division to create a new program called The South Carolina Law Enforcement Assistance Program. Today, he serves as Program Manager for SCLEAP. SCLEAP is a partnership between SLED, SCDPPPS, SCDPS, SCDNR and The Office of the Adjutant General (SC).  It serves over 17,000 state and local police officers, staff and family members as well as state employees of the OAG.