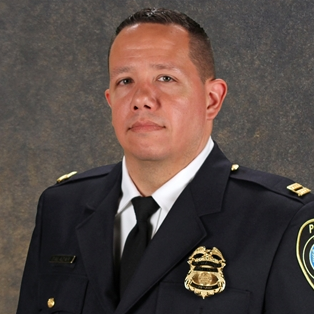 Captain David Salazar was appointed to the Milwaukee Police Department in 1996 and served as a patrol officer in the Seventh District until his promotion to Detective in 2001. As a Detective, he worked in the Robbery Division and later in the Homicide Division. From 2009 through 2013, he served as a Lieutenant in the Criminal Investigation Bureau and in the Internal Affairs Division.

In 2013, Captain Salazar was promoted to his current position as the commander of the Intelligence Fusion Center (IFC) for the Milwaukee Police Department which includes the Southeastern Wisconsin Threat Analysis Center, one of 77 state and major urban area fusion centers. In this role, he is responsible for providing an All Crimes – All-Hazards response to preparedness and protection of the Southeast Wisconsin UASI Region. He oversees a diverse team dedicated to creating an intelligence-led policing environment through prevention and enforcement initiatives. While serving at the IFC, Captain Salazar oversees the implementation of the National Integrated Ballistic Information Network, the expansion of the ShotSpotter System, and the creation of the Crime Gun Intelligence Center.