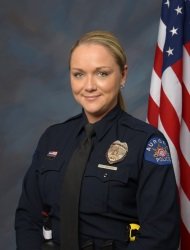 Crystal McCoy started out her career in law enforcement as a dispatcher in Florida in 1999. In 2000, she moved to Colorado where she worked as a contracted dispatcher for what is now the Department of Homeland Security (DHS), then as a security officer, sergeant, lieutenant, captain and acting contract manager for DHS armed security guard contracts across the State of Colorado.

In 2005 she became a police officer for the Glendale Colorado Police Department where she served as an officer, detective, and sergeant. In 2008 she became a Terrorism Liaison Officer (TLO) for the Colorado Information Analysis Center (CIAC) which is a function she still serves today. In 2013 she began working for the Aurora Colorado Police Department serving on the Burglary Impact Group, Trauma Response Team (TRT), Colorado Fallen Hero Foundation, and is currently assigned as a public information officer in the media relations unit.

In July of 2015 she became a founding vice president of a non-profit organization entitled Brotherhood for the Fallen, Aurora (BFTF), and this is her passion. This is one of three chapters across the nation which was founded by the Chicago Police Department chapter in 2010 and joined by the New York City Police Department (NYPD) also in 2015.

BFTF Aurora is comprised of sworn law enforcement officers from the Aurora Colorado Police Department, and is membership based. BFTF coordinates the travel, lodging, and transportation for members to attend line of duty death funerals across the nation where an officer was feloniously killed in the line of duty. While the mission is to make it possible for officers to attend the funerals, the purpose is to stand with and support the families of the fallen officers and our brothers and sisters in blue during these tragic times. We present a personalized, folded and encased thin blue line flag to the family, as well as a financial donation.

She is currently earning her Bachelor’s degree in Criminal Justice in her spare time through Central Christian College of Kansas. Crystal has received several awards and commendations in her career, and has a strong background in investigations, intelligence and a passion for honoring our fallen heroes. Crystal and has been awarded two distinguished service medals as well as other awards and commendations throughout her career.

She is a native to Evansville, Indiana, Crystal has lived in Colorado since 2001, is married and has two daughters.