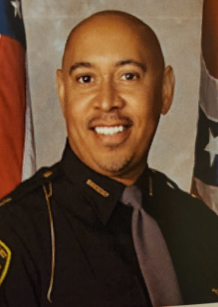 Sheriff Clifford Pinkney was confirmed as the Sheriff of Cuyahoga County in April of 2015. He holds nearly 30  years of service and experience at the Cuyahoga County Sheriff’s Office and was the first African-American to serve as Sheriff in Cuyahoga County.

Sheriff Pinkney started his career with the Cuyahoga County Sheriff’s Office in 1001. Prior to his appointment as Sheriff, he worked through the ranks as Deputy, Detective, Sergeant, Lieutenant, and Chief Deputy. Sheriff Pinkney has worked in the Detective Bureau, Narcotic Bureau, Sex Offender Unit, Patrol, and Courtroom Security, just to name a few. Sheriff Pinkney has been assigned to the FBI Gang Task Force and the US Marshal’s Violent Fugitive Task Force as well as worked with the following agencies: US Secret Service, Department of Homeland Security, DEA, ATF, and Ohio HIDTA.