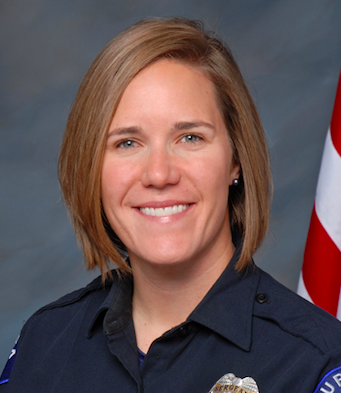 Sergeant Cassidee Carlson started at the Aurora Police Department in 2003.

Sergeant Carlson was the Public Information Officer for the Aurora Police Department from December of 2010 through January 2014. In her tenure, she handled a number of challenging situations to include officer-involved shootings, incidents of police misconduct, kidnappings, officers’ arrests, a number of homicides, and many other cases that a PIO in a busy jurisdiction would encounter. Sgt. Carlson has made presentations across the country on how media was handled for the Aurora Century 16 Theater shooting.

She recently was assigned to the Major Investigations Unit as the sergeant of the Internet Crimes Against Children Unit.

Sergeant Carlson has attended training in media relations, leadership, victim assistance, police tactics, homeland security, peer support, and is a graduate of the nine-month Leadership Aurora Development Program. She completed her Bachelors of Criminal Justice in 2002 from the University of Central Missouri and earned her Masters of Nonprofit Management at Regis University in Denver, CO in 2014.  She has also taught Law Enforcement Operations at the Community College of Aurora. Cassidee is a past member of the Leadership Aurora Board and is currently a Deputy Director on the Law Enforcement Torch Run for Special Olympics Executive Council.