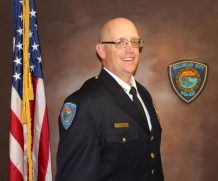 Chief Brian Williamson has been in the law enforcement profession for over 30 years.  He began his career as a military police officer in the United States Army in 1988.  After honorably discharging from the Army, Chief Williamson worked as a corrections officer, then deputy sheriff for the Mohave County Sheriff’s Office from 1992-1998.  In 1998 he joined the Bullhead City Police Department where he has held several ranks in different functional areas within the Department.  Chief Williamson served as the deputy chief of police from 2003 to 2013. He was appointed as interim chief of police on December 7, 2013; and chief of police on May 2, 2014. He also currently serves as the city emergency manager.