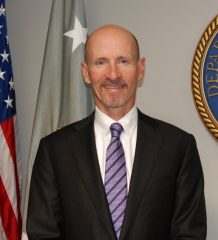 Bob Troyer was the United States Attorney in Colorado from 2016 to 2018. He was the First Assistant US Attorney for six years before that, and in the early 2000s, he was a line criminal prosecutor in that office’s drug and violent crime units. Bob spent the other 15 years of his legal career in private practice conducting internal investigations and litigating civil cases. While US Attorney Bob received the PSN Outstanding Contribution Award from the US Attorney General for his years of pioneering work developing and deploying a highly successful, NIBIN-based violent crime reduction strategy in Colorado. Over the last two years, Bob has worked with numerous policing agencies in Colorado on policy issues, and he conducted an investigation of Catholic clergy child sex abuse in Colorado over the last 70 years. Before he went to law school, Bob was a high school teacher and a commercial fisherman in Alaska.