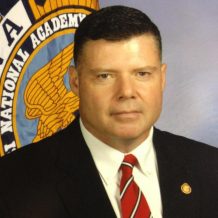 Captain Andy Carrier has been with the Georgia State Patrol for over 30 years. Prior to his service with GSP, he was a Deputy Sheriff with the Richmond County Sheriff’s Office for over 2 years. On July 1, 2019, he assumed the duties and responsibilities of Director of the newly created Governor’s Office of Public Safety Support, which oversees peer support and mental health services for all public safety agencies within the State of Georgia. Carrier holds a Master’s in Clinical Social Work from the University of Georgia, a Master’s in Public Administration from Columbus State University, and a Bachelor’s in Criminal Justice from Brenau College. Carrier is a graduate of the 245th Session of the FBI National Academy in Quantico, Virginia. In 2006, he graduated from the 19th class of the Georgia Law Enforcement Command College at Columbus State University and the Georgia Chiefs of Police Basic Class in 2018. He is a licensed Social Worker and is licensed to practice in Georgia, South Carolina and New York.  Carrier is the program manager for Georgia’s three day Post Critical Incident Seminar (PCIS).  He serves as the clinical director for the State of New York’s PCIS. Carrier has extensive training in trauma. He is trained in Cognitive Behavior Therapy (CBT) and Eye Movement Desensitization and Reprocessing (EMDR).