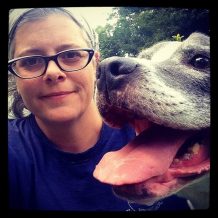 Amy Katherine Taylor has been working in animal welfare for over 18 years.  Ms. Taylor is the President and Founder of Ring Dog Rescue a pit bull type dog non-profit.  Ms. Taylor became a nationally certified Animal Control Officer in 2005, and has been an investigator for the Virginia Animal Fighting Task Force since 2007 and on the Board of Directors since 2013.  Ms. Taylor is a founding member and Vice President of A.L. Shilling Spay & Neuter.

Ms. Taylor completed her undergraduate studies in Forensic Crime Scene Investigation, she continued her studies and achieved a Masters of Science and Post-Baccalaureate degree in Criminal Justice.  Ms. Taylor is a Department of Criminal Justice Services General Instructor and a Subject Matter Expert.  Ms. Taylor was appointed to the Virginia Department of Agriculture and Consumer Services Animal Control Training workgroup in 2011.

Ms. Taylor was the honored recipient of the Meritorious Service to Law Enforcement Award in 2006.  Ms. Taylor also received the Compassion Award (2004) and the Presidents Award (2014) from the Virginia Federation of Humane Societies, and was voted one of Style Weekly’s Top 40 Under 40 in 2011.