Webinar presenter John Snook answered a number of your questions after his presentation, Fixing the Incentives that Force Sheriffs to be Mental Health Providers. Here are just a few of his responses.

Audience Question:  Why isn’t the Baker Act psychiatric hold expanded to include paramedics? Wouldn’t that assist with the workload and actually have medically trained individuals involved in the process?

John Snook: The Baker Act is a Florida specific law. One of the real complicated aspects of mental health care is every state’s commitment law is a bit different. If you know one state’s commitment law. And it can be different county to county in some states. At the end of the day, this is really a good question. It takes different iterations in different states. Who can apply and how? Oftentimes there isn’t a strong group pushing back against it. It’s just that honestly no one has done the work to figure it out. I know there is a significant effort being undertaken right now in Florida to work on trying to reshape some of the mental health engagement systems. I definitely would flag this is an issue to be part of the conversation. It is a reality. We need more people to engage more people rather than less.

Audience Question:  The issue of mental health isn’t just driving up the beds from law enforcement, it is also impacting our emergency rooms too. Isn’t that the case? We’re seeing costs go up in a number of areas because we are not addressing the mental health issues effectively. Is that correct?

John Snook: It is. We actually put out a report last week. We called Delayed in Deteriorating. We looked at just how bad it is in our emergency rooms. We are sort of in a dual crisis in our jails and in our emergency rooms, people with serious mental illness. The results that we have found are worse than I would have expected which is hard to do this day and age. The reality is if you have a serious mental illness, you are much more likely to sit in a hospital bed in an emergency room than anybody else, than anybody with any sort of physical illness or even a less severe mental illness. The problem’s getting worse every year. If you think about what that means for somebody, it is almost worse than a jail. If you ever sat in the ER for anything it is a terrible place to be in terms of the stress, the noise. There’s actually research that says the longer you sit in an emergency room, it can actually cause you to have psychosis. You can basically have a mental health condition come up because you’ve sat in the ER for too long. If you think about somebody with mental illness trying to get care in the midst of a crisis in a loud dangerous situation that isn’t set up to provide you care, it’s basically the worst-case scenario other than trying to provide that care in a jail cell.

Audience Question: John it seems like this is a really huge and complex issue. Is this merely a matter of getting more funding or is it also a combination of more funding, more training, more beds? It sounds like there is a solution on a number of fronts.

John Snook: Exactly. What we often say is you don’t want to throw good money after bad. We’ve seen a lot of communities that have struggled because they have really pushed to get a large influx whether it is a new tax or a sort of a new significant influx of monies from the system and they haven’t used it well. They haven’t focused it on this more serious population. The general public starts to think well there is no way to address this problem. This is simply an unsolvable situation. That hurts everybody. I think you are exactly right. We want to make sure we are not in a situation where you are asking for more money without a plan for how to use it because throwing good money after bad doesn’t help the problem. It actually at the end of the day most likely hurts it.

Audience Question:  I’m a psychiatric nurse. In my state, the sheriff’s office is held responsible by statute for transporting seriously mentally ill patients to ERs, from ERs to mental health treatment facility, round trip to court and mental hearings and etcetera. This seems like an undue burden on the sheriff’s offices, how transportation typically handled nationwide?

John Snook: This is really an important aspect. I appreciate somebody bringing it up. We simply didn’t have time to get into it. There is another group that we work with that did an analysis of the laws across the country just how many communities say this has to be done, that this a shall be done by sheriffs or have custody laws that were basically or were written when you were dropping somebody off with a horse and haven’t been updated since then. The reality is that is one of the issues where we are really starting to engage lawmakers that a lot of this work isn’t a change in the law sort of issue but that is one of the places where the conversations are around either changing the law or changing the regulations around the custody is really important because you don’t want a situation like that where everybody recognizes well we don’t need sheriffs to do this. It doesn’t probably make sense to do this work but we’ve forced sheriffs to do it. Now we are just going to kind of understanding that that is the way the law is written so leave it at that. That is a conversation we are having in a lot of communities. I think those initiatives around data-driven justice etc. that are starting to recognize these little spots where the system is broken but we really didn’t pay attention to it are really helping the conversation. When one state fixes it then one state can look to the way that they do it and say you know this isn’t something that will destroy our system. It makes a lot of sense and it actually ends up saving us money.

Audience Question:  I’m working specifically on this topic statewide right now. Do you have the cost in other states? I mean hard numbers to show our legislature. Things like the average cost to police, sheriffs, counties who are dealing with untreated seriously mentally ill and substance abuse. He is finding that there are some gaps in their own data that they collect there locally. Do you have any advice or is there somebody maybe that if is she gets in touch with you, do you have somebody there on staff that might be able to help?

John Snook: Yes. Elizabeth Sinclair is our director of research. This is her day-to-day, just figuring out these numbers. I want to give a special shout out to the Georgia Folks. Georgia really did a good job sort of setting the model for how to figure out this stuff. The Sherriff there did a really nice job of saying we are spending a huge amount of money and then backing it up by surveying and doing data themselves of what the experience was day-to-day, hour by hour. That really is what you need to do to be able to make the case. It’s complicated to do but it isn’t impossible. It really pays dividends to have those hard numbers and I think that’s exactly right.

Audience Question:  The number issue we hear repeatedly from providers is the lack of appropriate housing. Our hospitals have patients who have been there 6 months at a cost to the hospital because there is simply nowhere for them to discharge to. Is there a county who’s doing tiered housing models well, somebody they can look to and learn from?

John Snook: Yes. This is another one of those pieces that we didn’t have time to get through but it is a huge component of this process. There are far too many individuals who are simply unable to get out of their beds that could be open for somebody else because there is nowhere for them to go in the community. California right now is really struggling with this, with the closure of board and care facilities which is the sort of middle ground places that provide people treatment but aren’t a facility but still a little bit more than just your normal typical apartment. The resources are really one of the confident enough, optimistic about because I think the conversations are going well. The corporations for supportive housing has done a really good job of collecting a lot of that data saying here’s where it is working well, here is what looks good, here’s how the system works well. It’s both very so complicated, expensive system so NYC Fountain House is a great model that’s had all sorts of things that included supported housing down to the really rural communities that I think have done a really nice job in areas that you say that is really hard to find housing whether it is because oil shell drilling and the cost. It’s that or we are just not having resources period. There are some really good models all across the county that allow rural communities to succeed with this population. It is not easy but there are models that you can emulate.

Audience Question:  How feasible is it to mandate CIT training for all new cadets and corrections officers nationwide? She goes on to say such as like San Antonio is starting the Ernie and Joe crisis cops documentary. I’m assuming you know what that is?

John Snook: I know this is sort of a bigger conversation amongst law enforcement. I know that the CIT guy, one of the things that they are working on is sort of making sure that people understand that CIT is more than just a training. That it is the model. It’s the idea of coordinating the services even beyond the actual training but I think the CIT themselves has recognized that in-academy training and regular training on diversion, on diffusion, on mental health issues is really vital. I like this sort of step model that they are talking about. You have CIT officers who volunteer for the process. That doesn’t mean that they are the only ones who get mental health training. There’s mental health training for everybody. It’s a tiered model that allows you to have different levels depending on your seniority, on your engagement in the issue and whether or not if you feel like this is where you want to be and whether it is an issue that you just don’t care about. Some folks have other issues that they care about.

Click Here to Watch a Recording of Fixing the Incentives that Force Sheriffs to be Mental Health Providers. 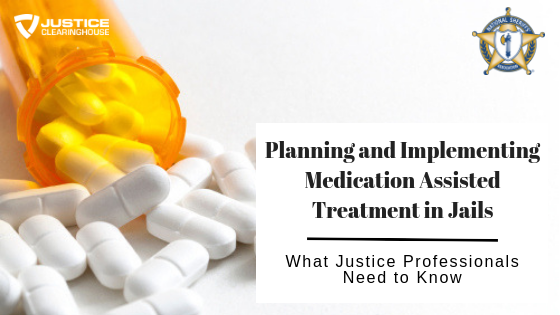 Jails in the US admit more than 10.9 Million inmates per year, a portion of whom suffer from some fo […]