Webinar presenter Trevor Whipple answered a number of your questions after his presentation, Animal Cruelty and Violent Crime: What First Responding Officers Need to Know. Here are just a few of his responses.

Audience Question: Where does the body condition scoring system comes from and is it the same in every State?

Trevor Whipple:  Yes. I am not privy to where it originated but it’s a standardized body condition scoring system both for dogs and for equine, for horses. So, it’s the same across, coast to coast. And if Jody wants To know more about the granular details of how that came to be, feel free to drop me an email and I will make sure to find that information for you.

Audience Question: Do you have a recommendation on cases when there are several adults in the home all living with an animal and they all start pointing their finger, saying that the other person is the owner and responsible for care. What do you in that situation?

Trevor Whipple:  It’s tough. You can try to find out who’s been taking the animal to the vet. Is there anyone else in the home you can talk to? Is there a neighbor? And sometimes you get everybody pointing the finger to everybody else and you can be stuck. If the situation is where the animal is really in distress, remove the animal and try to figure it out later. And maybe, in some cases, we can never figure it out. Just continue to be inquisitive asking questions, trying to drill down and hope you can wear somebody down. If not, at the end of the day, it might be a situation where you remove the animal, get the animal safe, and hope you can do something at another time.

Audience Question: Recent news has indicated there’s been serious abuse crimes that are happening as part of the Amish Community. Additionally, there is a correlation with animal treatment. Do you have a sense of what’s happening on this issue in Pennsylvania?

Trevor Whipple:  I do not. I am going to bet that there are folks in my main office that are very aware of this. Again, I don’t wish the stark answer of;  “Drop an email and we will get you the answer.” But I know that I could find a resource that could help inform and answer this person’s question.

Audience Question: If you could step back for a moment, what are the biggest issues you’re seeing facing Animal Care and Control agencies these days? Or perhaps, maybe there are some issues that you’re starting to see coming down the pipe that we need to be aware of?

Trevor Whipple:  I think, probably, the most common and we hear it all the time: is resources. Many times, particularly, local animal care associations or agencies are struggling to have enough space, have enough funds to care for animals. I think that’s always a challenge. That’s why I encourage people to look into their statutes, to see if you have anything that requires an owner to provide for the funding of the care during a case. If not, to consider looking at potential legislation for that. The other things I see coming down are, I think the things we are dealing with regularly, but that’s the pet protection orders. In my career, I’ve seen lots of opportunity for pets to be used as a kind of pawn to keep a person in a very dangerous and violent situation. Because they were afraid that if they left they would not be able to take the animal with them so they remained in a tough situation. I think those are the things, I don’t know if that’s new coming down the pipe, but they are the things I continue to worry about and see happening.

Audience Question: What are your thoughts of implementing long term restorative justice processes and community input when you’ve had children found guilty of animal abuse? And, you want to address present and future animal abuse? Current laws are never seen as enough punishment for an animal abuser but might this be a way to be instructive and curative for the community and person exposed and responsible more than just punitive punishment. What are your thoughts about restorative justice especially in the advent of kids in animal abuse?

Trevor Whipple:  Right. It’s certainly where society is headed in criminal justice in general. We’re talking criminal justice reform. We’re seeing more and more, pointing towards the use of community justice or restorative justice programs. One of the things that I think, and I don’t know how we do it, but one of the things that happen in restorative justice many times is that by mere definition there is no record. If you’re successful in a restorative justice program then you don’t have a record. That’s one of the reasons we utilize it. One of my concerns is that because this behavior can be so dangerous and could be an indicator of future criminal behavior. That if we use a 100%, as I know it today, Restorative System, we may lose the ability to document for future interaction. So if we can blend, and in Vermont, we do blend sometimes, we have a traditional punitive justice system, piece of the case, where someone may be held accountable in a court. But then we add-on, we bolt-on a restorative process so that we can spend time in a restorative setting talking to the individual. Helping them to understand how their behavior has impacted others, how their behavior has impacted the animal. So, I think there’s a lot to evolve there. I’m very interested in exploring that because I agree with the person asking the question. I think there’s a lot of value to Restorative Practices because it causes the offender to reflect and learn. That doesn’t always happen in punitive. But my cautionary tale is I also don’t want to lose the ability to have some way to look back in the future should problem re-arise.

Click Here to Watch a Recording of Animal Cruelty and Violent Crime: What First Responding Officers Need to Know. 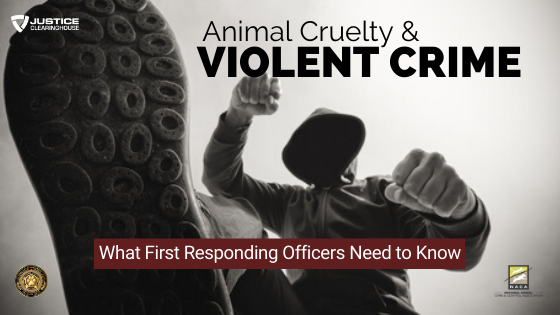