Webinar presenter Trevor Whipple answered a number of your questions after his presentation, Animal Cruelty Investigations and the 4th Amendment: Avoiding the Fruit of the Poisonous Tree. Here are just a few of his responses.

Trevor Whipple: I don’t think they did. That’s the real frustrating thing. I don’t think they did at the time. You know, that’s a situation where perhaps with a more definitive interview of the neighbor, “Describe to me what that horse looked like,” “Are you certain you haven’t seen them in four days?” “When George turns the four horses out to the pasture, would you mind listening for me and tell me if you hear anything?” if they say, “Oh yeah, I hear a horse neighing in the barn.” Additional details, maybe a more eloquent conversation with George, to try to encourage him to provide consent without threats, force, or coercion. Sometimes it’s, you know something bad is going on. And, sadly, you have to just wait a little bit, you have to ask a few more questions and spend a little more time observing. But I think probably the easiest would be to try to get more information from the neighbors if you were able to get a warrant at all.

Audience Question: Got it. So, it sounds like your advice, in a lot of cases, is to slow down, get a little bit more information, and make sure that you’re proceeding very carefully in these cases. Is that right?

Trevor Whipple: Yes, and realizing there’s heartbreak in some cases. In some cases, you know in your gut bad stuff is going on, and there just isn’t enough. You know, we don’t want people to cross that line. We don’t want a Fourth Amendment violation. We also don’t want animals abused or neglected. So, slow it down, be thoughtful, be deliberative. Sometimes, you just have to be patient and bide your time and do it legally legitimately, and ethically.

Audience Question: Referring to the case study with the apartments. Wouldn’t it have been a legal seizure to police have had a search warrant and would the dog be covered under the search warrant?

Trevor Whipple: It would have depended on what the Search Warrant said. I don’t know why they would have gone there. You know, if the neighbor had called and said, “Hey there is a dog inside, it’s in a crate, it’s whimpering.” And the police didn’t feel comfortable with exigency,  they could look through the window, and they could see a dog in the crate if they had gone to a judicial officer and applied for that warrant. They would have had to say we want to search the apartment, in particular, you know, we want to search the kitchen. There’s a crate in the kitchen. We want to search and seize any animals that appear in need of medical care. And in that case, the warrant would have already listed that animals could be seized. So, it would have been, you know, hardly any risk at all, the police would have that warrant. It would already be authorized by a judge. And so, if you’re the humane agent, the animal control officer, and the police say, “I’ve got a warrant, the warrant says we can go in, the warrantsays we can take the animals”, then I think your risk is point zero one.

Audience Question: So, I do have a number of people wondering what happens next, were George’s horses ever rescued? Were you able to open up another case to rescue those animals? What happened after the court cases?

Trevor Whipple: Yeah. So, you know it was, it was gut-wrenching because George has no criminal record, he’s not held accountable. The court ruled that the animals had to go back to George. Because of the neglect, there was a ruling from the court that says that the local Animal Control officer has to be allowed access, and there was a some period where officials were allowed access once a week for perhaps six months. But there was some provision there, just to make sure that the animals were being properly cared for. But the heartbreak was he was not held accountable.

Click Here to Watch a Recording of Animal Cruelty Investigations and the 4th Amendment: Avoiding the Fruit of the Poisonous Tree. 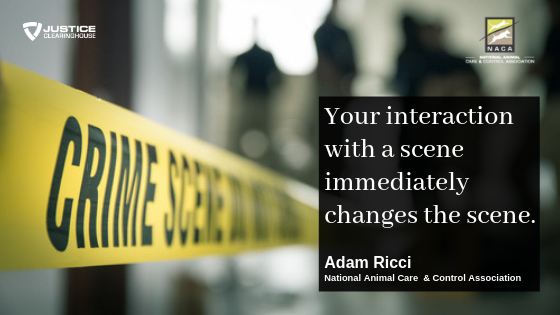 Adam Ricci provided a wealth of information during his webinar, Advanced Components of Animal Cruelt […]