Webinar presenter Janee Boswell answered a number of your questions after her presentation, 2013 Colorado Floods: Boulder’s Emergency Animal Air Rescues. A Military and Animal Control Collaboration. Here are just a few of her responses.

Audience Question: Where did people gather with their pets to catch the school buses to go to the co-located shelters?

Janee Boswell: So that was at the airport. We kind of have this central location and when the helicopters came in, we will offload the animals and people, and we would have them in the check-in area and they would check-in so the officials could make sure that these people are out and they’re safe. And then, we would load down right onto the buses and then they would go to the co-located shelter.

Audience Question: How many animal control officers were actually on staff during this time period?

Janee Boswell: We ended up calling all of them on. I can’t say 15 because we did swap out a couple of people, so at any given time we would have 13 officers on duty.

Audience Question: Did you have a volunteer County Animal Response Team (CART) to help you and assist you in the shelters?

Janee Boswell: We didn’t, and that was one of our learning lessons. If I had been able to do my entire presentation that was one thing, we had talked about is the utilization of volunteers and we have a huge volunteer base through the Humane Society of about 500 volunteers and now written into our plan is that we would utilize them to those co-located shelters.

Audience Question: How long did you hold on to stray or unidentified owner animal?

Janee Boswell: Due to this event, we actually held to them for about 15 days. Our normal stray wait period is 5. However, due to the extenuating circumstances, the shelters made the decision to hold them for 15 days.

Audience Question: Did you have any to go on that went unclaimed?

Janee Boswell: No we didn’t.

Audience Question: What do think would have happened if you had not had such an animal-friendly commander, or had somebody who just simply thought that animals were expendable? How do you think things would have been different?

Janee Boswell: I think it would have drastically been different for our community at the time of the event and after the events. Our community after that fire, they had expressed a lot of frustration with us after the 4 Mile fire that we didn’t more actively rescue animals and that we didn’t have a better plan in place. That’s why we really try to do that preparation. I think if we would have a different commander come in and say: “No you can’t”, or “We’re not going to take those animals”, I think we would have had  people that were staying up in the mountains with their animals and we’re probably would have a lot more loss of life…human life.

Audience Question: What is IMT stand for?

Audience Question: How did you tag the animals to their owners? So did you have a hospital band marking the pet parrots like in the nursery unit in the hospital? How did you tag so that the right dog will get paired back with the owner?

Janee Boswell: We probably could have done that better. But what we did is we would tag the dog and we would put the owner’s information on there. I guess if we would have shady individuals, they could have taken off with somebody else’s dog, but we knew them, so we would put our face to that dog. We would put their name on that kennel, then we would make sure that we were reuniting those people. We didn’t have any instances where somebody stole somebody else’s animal or anything like that, but we probably could have identified the owner as well just to make sure that we’re matching that up.

Audience Question: Now that you’ve gone through this experience, and I know that this is only a tiny little piece of a much larger presentation, so be prepared of me calling you to get the other parts of this presentation from you. Knowing what you now know, if you could give anybody a couple of pieces of advice what would you tell them? What were your lessons learned that you wish you would have thought of differently beforehand or could have prepared differently beforehand?

Janee Boswell: I think the personnel issue and the volunteers. By the end of this event, everybody was so drained and just emotionally and physically exhausted. I would have done a much better job utilizing volunteers and putting them in those… during the time that we were actually working in those operational periods and then allowing those officers a couple of days off and then okay now you’re going to come in and work. I think that’s one lesson that was huge for me to learn. I think the utilization of the outside resources. I can’t stress to you enough how I felt, I felt terrible about the fact that we utilize 2 national organizations on this one event that we pretty much had under control and they have such extensive history and knowledge and training that they could’ve been used a different location or in the event that there was another big disaster someplace. I just felt that we had misused them.

Audience Question: Knowing that the American Red Cross has such a tremendous training program for their disaster recovery effort and disaster assistance efforts, how did you coordinate with Red Cross? How did you train for this, prepare for this? Did you cross train with other organizations like Red Cross? Did you do tabletop exercises? Talk about that element of this.

Janee Boswell: That was one thing that we have learned years ago as I had mentioned we have had numerous fires and I think it was back in 2007, we had a fire where Red Cross had responded out and people wanted a co-located shelter and Red Cross was like: “No that can’t happen”, “That doesn’t happen”, and  we received a lot of push back from the community and so we’ve had people that literally would leave the Red Cross shelter and were sleeping in tents and that sort of thing. After that event, Red Cross and the Animal Response Team got together and said: “We have to do this better and we have to make it and more amenable for our community. After that, both organizations, both sides of the organizations, made a concerted effort that we will do co-located sheltering and we have trained. We’ve trained tabletop exercises; they have not participated in our hands-on practical exercises but it’s an ongoing relationship that we have. It’s gotten to the point whenever they know that they’re going to be activated and they actually call me up and say “Hey, we may need a co-located shelter heads up”.

Audience Question: Speaking of reaching out to these organizations, had you built those relationships ahead of time? Were there already operational agreements in place or were there things that you truly did have to do on the fly?

Janee Boswell: So we had some relationships some places like Code 3 and American Humane, both of those were lucky enough that both of those organizations are here in Colorado. We have developed great relationships with them over the years. We absolutely have some relationships that we kind had to go on the fly, like the hardware store we’re talking about, McGuckin’s, we’ve known them for years but we really didn’t have a close working relationship then, so when I call them it was like okay shot in the dark, let’s see what they can do. Then, we also had Pet Smart and so I had reached out to Pet Smart and Pet Smart is like “I don’t know that we have enough stuff that we can donate to you because we’re worried about the shelter animals and so we have to allocate stuff for that”. That one was one that I thought would be in the bag and we didn’t so that’s why I called McGuckin’s.

Audience Question: How would you have planned, or how did you cope with all of the emotions that happened during that function and was there additional emotional support? Did you bring in therapy? How did you help folks deal with all of those emotions, both the volunteers as well as the staff and the people going through it? How did you address that element of things?

Janee Boswell: I’m so glad you bring that up because that’s something we don’t do well. I feel like that’s a huge deficit that’s lacking in law enforcement and emergency response and it’s just something that we don’t do well and we didn’t do anything. Our only reprieve or counseling sessions were with each other and talking to each other about it. It’s tough because when you go home, even our spouses don’t understand what we go through or our significant others, they don’t know what that’s about and so we really relied upon each other to vent and control and talk through things. But it’s so harsh. It still touches me to this day and I know it does others that I continue to work with and I think that’s something that we absolutely, as an industry need to work on. 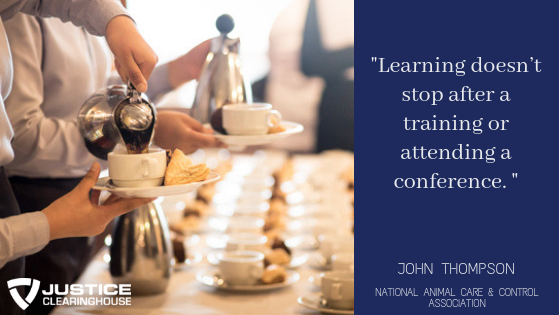 Insight about Learning from John Thompson

During a recent Justice Clearinghouse interview, John Thompson shared a super insight about the impo […]